I Will Do Something That The Vast Majority Of Christians Will Not Do.

I am not going to make any endorsements here for the 2016 Presidential election; I am just going to affirm that, in the California primaries, I am going to vote for the most conservative Republican candidate on the ballot.   I will vote for a conservative because I am a Christian and a conservative ideology is much, Much, MUCH more closely aligned with Christian biblical truth than is a liberal ideology. I will vote for a Republican because Republicans are generally more conservative and in line with basic biblical principles than are Democrats who are generally liberal and strongly favorable toward big government socialism and antagonistic to our freedoms. A Christian Democrat is an oxymoron. To re-phrase and piggy-back on a stupid question by the Pope, "How can a person be a Democrat and call himself a Christian?"

However, after the primaries, when the general election comes in November, I will do something that the VAST MAJORITY OF PROFESSING CHRISTIANS WILL NOT DO. I will vote. That's right, you read that correctly; I WILL VOTE.

Every four years the vast majority of Christians suddenly decide to appeal to their long-neglected consciences and refuse to vote for someone who does not measure up to their ideal, perfect candidate so they just stay home and don't vote. Here is a news flash, you dummies; a failure to vote is an automatic vote for the opposition.

Your ideal perfect candidate is NOT running. Jesus is NOT on the ballot. All the rest of them are imperfect sinners. Nevertheless, you are responsible for the outcome whether or not you vote so get off your self- righteous high horse and vote right.

In the general election, I will vote for the Republican candidate even if his name is Mickey Mouse, Alfred E. Neuman, or Donald Trump, because the alternative is not acceptable.  A democratic win will be a victory for the anti-American, socialist ideology that will destroy our constitutional form of government, our Bill of Rights, our judicial system, our rule of law, our economic stability, our education (however messed up and inefficient as it is), our culture, our security, and our freedoms (including religious freedoms).

I hope, by November, we have an acceptable candidate. But if Trump is the one, I will vote for him. As president, he might be a disaster; he might be right only 20 or 30 percent of the time BUT neither the "over-the-hill" deadbeat, hippy socialist, nor the angry, barking, pant-suit wearing, crazy lying lesbian will improve our moral or economic climate. They will definitely rule contrary to biblical principles of governance.  They will be 100% BAD for this country.

Don't let your seared consciences keep you from doing right and voting RIGHT.

Posted by hymns that preach at 4:45 PM 2 comments:

***That's Not How It Works - Thank You, Lord, Blessed Assurance 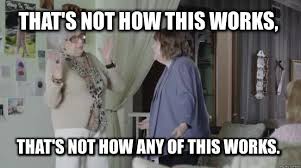 Yes, I believe in the doctrine of the perseverance of the saints.   But it’s not like you think.

Not all, but some Christians who hold to an Arminian theology of salvation, believe that a person who, apparently “accepts the Lord” can lose his salvation.

However, many of them believe in the doctrine of “the eternal security of the believer.”  That is the belief that a person who, at one time, walked an aisle, repeated a prayer, raised his hand, asked Jesus into his life, joined a church, got baptized, was overcome by an emotional or spiritual experience, got right with God, or responded to any other human-generated machination to become a Christian, is eternally saved and safe in the arms of Jesus.  He believes that, as long as he “did that thing” once, he is Heaven bound.  His ticket was paid.

Now pay close attention here because I don’t want you to miss this.  If your salvation is a result of something you did a long, long time ago; if you are depending or trusting in that action to get you into Heaven, and you think that you can continue in disobedience and sin, YOU ARE WRONG.

I don’t know how many times I have seen acquaintances of mine, who have once professed “saving faith” and yet turn away from God to continuously dwell in open, and unrepentant sin.

So what is the difference between my belief in “the perseverance of the saints” and their belief in “eternal security?

Eternal security is a false belief that, because a person accepted the Lord, he is saved. He excuses his actions thinking that “Jesus loves him just the way he is and He will always say, I forgive.”  As a Christian, he believes that he is to try to be as good as he can be but this is a sinful world and temptations are all around.  And besides, God understands his weaknesses.  After all, God created him the way he is and He will not judge him.  Jesus paid for all that.

On the other hand, the phrase, “perseverance of the saints” is a doctrine in a context.

The context begins with God.  It begins with His perfect holiness and His assessment of man.  MAN IS NO GOOD.  Man is incapable of making himself good enough for God.  He cannot clean himself up.  He is dead in his sins and dead men cannot accept, invite, or do anything else to initiate their salvation.   If God will not save him or raise him up to new life, he cannot be saved.

The word, “perseverance” is followed by a preposition with an object -- the “saints.”  The word, saint, means one who is sanctified or set apart for a special (or holy) purpose.   When God saves a man, He sets him apart from the world for His own purpose and His own glory.  His spirit indwells the man and begins the process of cleaning him up and making him fit for Heaven.

And the Spirit of God convicts the man of his sin.  That means that, whenever the man sins, the Spirit chases and chastens him relentlessly, until he grieves over his sin and is brought to confession and repentance (which means he stops doing what he was doing).   The Spirit is like a mother with eyes in the back of her head; she sees everything, and she knows what you did and she will make your life miserable until you are sorry and corrected.

And that work of the Spirit is one of the evidences of salvation.  It is how a believer can know for certain, that he is saved.  If you are not miserable with your sin; if you can ignore the pleas from other Christians, to stop, and if you can quench or silence the Spirit and continue to sin, it is probable that you do not have the indwelling Spirit of God and there is good reason to question your salvation.

Sure, saints sin.  We all sin because we are sinners.  But a saint will not continue to sit comfortably in unrepentant, rebellious sin because GOD WON'T LET HIM.   When God saves a man, He saves him completely and to the uttermost.   Saints persevere because God is holding those He saved, firmly in His hand and no one can take them out.  That is ASSURANCE.  Blessed Assurance/ Thank You, Lord

Posted by hymns that preach at 7:30 PM No comments:

I stumbled onto this stupid "Christian" meme today, that someone posted on Facebook.  These things are the "information superhighway's" version of bumper stickers like "Honk if you love Jesus" or "Jesus Is My Co-pilot."  Most of them are doctrinally weak at best.  This one falls into the category of HERESY. 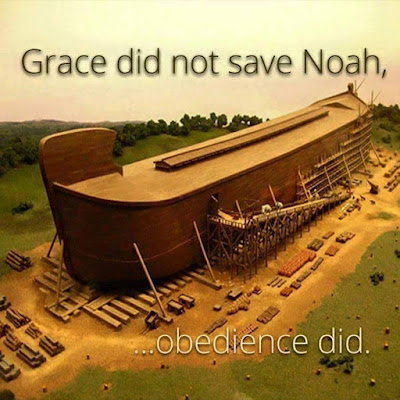 It implies that men can attain salvation by keeping the law.  But they would be wrong.

Sure, Noah heard from God and fear gripped him.  And it was out of that fear that he obeyed God's command.  But the verdict was already pronounced,  ALL men were (and are) sinners, including Noah. But Noah found grace in the eyes of the Lord (you can read it in Genesis).

We're all like that; every one of us.  We obey laws because we fear the consequences of breaking them.

The truth is that salvation is NOT achievable by obeying God's commands (keeping the laws).  Salvation is obtained ONLY by God's Grace ALONE through the FAITH that He gives us to believe.  And then, a believer has a new heart and a free will to turn away from sin and worship God in humble submission and loving obedience.

Posted by hymns that preach at 5:37 PM No comments: