Ten Reasons Why Every Believer Should Speak In Tongues

A few years ago, in my town, a local “pastor” ran an ad in one of those free, weekly advertisers, encouraging people to call the number for the bible message that "the Lord had given him." That should be the first tip-off to every discerning Christrian.  Whenever someone says, "the Lord told me" the first response should be, "What chapter and verse?"  If it is not there, it's not from God.

Nevertheless, my curiosity got th 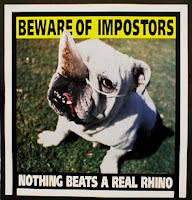 e best of me so I called to hear the message, “Ten Reasons Why Every Believer Should Speak In Tongues.”
Ten reasons; wow, that's pretty ambitious. I was thinking, at the time, it would be difficult for me to try to find ten biblical reasons to support almost any legitimate scriptural imperative. But I must remind myself, he got this message from God so I guess anything is possible.

Here it is. This is verbatim (and remember, he claimed that he got this by direct revelation from God; I wonder if that includes all the errors too?). I painstakingly transcribed it right from his recorded message. I can’t make this stuff up. What a bunch of hooey. Without any sense of shame, this “wolf in sheep’s clothing” offered this convoluted, twisted, illogical and disconnected claptrap, along with out-of-context “proof texts” (except where he couldn’t find any) for the mindless deluded, willfully ignorant, and elitist “full gospel” sheep.


TEN REASONS WHY EVERY BELIEVER SHOULD SPEAK IN TONGUES

Reason #2 - Tongues are for our spiritual edification. I Corinthians 14:4 “He that speaketh in an unknown tongue edifieth himself” (the word edifieth – to edify- means to build up or charge).

Reason #3 - Tongues reminds us of the Spirit’s indwelling presence. Acts 10:46 “For they heard them speak with tongues and magnify God.”

Reason #4 - Praying in tongues is praying in line with God’s perfect will. I Corinthians 14:14 “For if I pray in an unknown tongue, my spirit prayeth but my understanding is unfruitful.”

Reason #5 - Praying in tongues stimulates faith. Jude 1:20 “But ye, beloved, building up yourselves on your most holy faith, praying in the Holy Spirit.”

Reason #6 - Speaking in tongues is a means of keeping you free from contamination with the ungodly, the profane, and the vulgar talk around you if you are working on the job or out in public.

Reason #7 - Speaking in tongues provides a way for things to be prayed for, but for which no one thinks to pray about or about which they know nothing. The Holy Spirit knows everything. The Word says, “The Spirit also helpeth our infirmities; for we know not what we should pray for as we ought; but the Spirit Himself maketh intercession for us with groanings which cannot be uttered in articulate speech.”

Reason #8 - Isaiah 28:11-12 says, “For with stammering lips and another tongue will he speak to this people. To whom he said, ‘this is the rest by which ye may cause the weary to rest, and this is the refreshing;’ yet they would not hear.” What is the rest? Speaking with other tongues.

Reason #10 - James 3:8 says, “But the tongue can no man tame; it is an unruly evil full of deadly poison.” Speaking in tongues; yielding your tongue to the Holy Spirit to speak with other tongues is a long step toward fully yielding all your members to God.

Posted by hymns that preach at 2:30 PM 7 comments:

"Our thoughts and prayers go out to the family of the deceased."

Do you say stuff like this?  If so, your prayers and thoughts are bouncing off the walls and dropping to the floor.

Do you really believe that your words just float around the world until they magically land on your intended target?  And do you really think those words have any magical powers?  Do you think that your friends will be helped by an all-encompassing cloud of happy thoughts?
Stop saying that!  If you are a Christian, you have the ear of the Almighty God of the universe.  If you are going to pray for people, make sure they know that you are going to petition the One and only True God who knows their needs and can accomplish His will in their lives.

"...do not be anxious about anything, but in everything by prayer and supplication with thanksgiving let your requests be made known TO God."  Philippians 4:6

Posted by hymns that preach at 5:05 PM 3 comments:

I selected this song for our Sunday worship because my Pastor's sermon was about how we (Christians) are to be prepared for persecution and suffering because our Lord suffered persecution.

In this hymn, the writer, Charles Gabriel, refers to the Lord as “Jesus the Nazarene” which references a statement in Matthew’s Gospel:
“He [the Lord Jesus] came and dwelt in a city called Nazareth, that it might be fulfilled which was spoken by the prophets, ‘He shall be called a Nazarene’.”

What does that mean?  In general, Nazareth had a lousy reputation; it was the “lowlife neighborhood on the other side of the tracks.”  Nazarenes were despised by most people including the people of Galilee.

When Philip referred to the Lord as “Jesus of Nazareth”, Nathanael’s derogatory response was, “Can any good thing come out of Nazareth?”

Later, followers of Christ (who were associated with Paul), before they

were known as Christians, were called, “the sect of the Nazarenes” which was intended to be an insult and a put-down.  (And, by the way, the world STILL hates us because the world hates Christ.)

This kind of scornful contempt for the Son of God was prophesied:

(Ps. 22:6-7) But I am a worm and not a man, scorned by mankind and despised by the people.  All who see me mock me; they make mouths at me; they wag their heads;

(Ps. 69:20-21)  Reproaches have broken my heart so that I am in despair.  I looked for pity, but there was none, and for comforters, but I found none.  They gave me poison for food, and for my thirst they gave me sour wine to drink.

For Jesus to be called a “Nazarene” might allude back to Isaiah’s prophecy;

Surely He has borne our griefs and carried our sorrows; yet we esteemed Him stricken, smitten by God, and afflicted.

So all of this is to be expected.  We are all familiar with the first few verses in the second chapter of Philippians-- the “Humiliation of Christ.”  It details a shocking description of how the Almighty God, the creator of the Universe, the Holy and Just One, could stoop so low and take on the form of a man and suffer and die for His creation.  Certainly this humiliation would include rejection, persecution, grief, beatings, scorn, and maltreatment.

The hymn writer’s personal sense of “amazement” is that this One, so despised by humans, would love Him enough to die for his sins.

I stand amazed in the presence,
Of Jesus, the Nazarene,
And wonder how He could love me,
A sinner, condemned, unclean.

He took my sins and my sorrows;
He made them His very own;
He bore the burden to Calvary
And suffered and died alone.

When with the ransomed in glory,
His face I at last shall see,
’Twill be my joy through the ages
To sing of His love for me.

And that is the message of the gospel of grace, the Good News that the Son of God set aside His glory and humbled Himself to be “the Lamb of God who takes away the sin of the world.”

He suffered and died a terrible death, under the wrath of God, as our substitute, so that we, through faith in Him, might be forgiven and receive the gift of eternal life.  How marvelous, how wonderful is my Savior's love for me.

Posted by hymns that preach at 6:47 PM No comments: