Quit Your Whining! When You Vote For Socialists, You Get Socialism.

In the debate about the constitutionality of Obamacare, lefties are always quick to point out that we have Social Security and Medicare.  So then, they ask, why are we concerned, now, about another socialistic government overreach?


Well just because we allowed our representatives to make stupid, irresponsible, and unconstitutional laws in the past is no reason why we should ignore this monstrous power grab now.  It is never right to do wrong.
But, for the record, here are the facts about Social Security.  Had it been proposed then, the way it is now, we would have rejected it wholeheartedly.  Instead, socialist ideologues, like camels sticking their noses under the tent, sneaked in their agenda a little bit at a time until, here, we are entrenched in the miry muck with no way out.


Just in case some of you young whippersnappers (and some older ones) didn't know this. It's easy to check out, if you don't believe it.   Regardless of your love or hate for Social Security, after reading this you cannot deny that it was misrepresented in its inception, deceptive in its institution,  and is constitutionally illegal (that is, unless you live in the upside down-inside-out, happycrap land of lunatic lefties).


Be sure and show this to your kids. They need a little history lesson on the consequences of irresponsible actions at the voting booth and the natural tendency of government toward tyrannical rule.  It doesn't matter whether you are Democrat or Republican; both parties are taking us down the same road to serfdom.  Facts are Facts!!

1. That participation in the program would be completely voluntary (that means you don’t have to participate).
2. That the participants would only have to pay 1% of the first $1,400 of their annual incomes into the program.
3. That the money the participants elected to put into the program would be deductible from their income for tax purposes each year.
4. That the money the participants put into the Independent 'Trust Fund' rather than into the General Operating fund, and therefore, would only be used to fund the Social Security Retirement Program, and no other Government program, and,
5. That the annuity payments to the retirees would never be taxed as income.
Since many of us have paid into FICA for years and are now receiving a Social Security check every month -- and then finding that we are getting taxed on 85% of the money we paid to the federal government to 'put away' -- you may be interested in the following:
·        It was Lyndon B. Johnson (with a Democrat controlled congress) who took Social Security from the Independent 'Trust Fund' and put it into the General fund so that Congress could spend it.
·        It was the Democrat Party that eliminated the income tax deduction for Social Security (FICA) withholding.
·        It was the Democrat Party, with Al Gore, the Vice President of the U.S. casting the tie-breaking vote, that first started taxing Social Security annuities.
·        It was Jimmy Carter and the Democrat Party that began giving annuity payments to immigrants.  That’s right!  Immigrants moved into this country, and at age 65, began to receive Social Security payments! The Democratic Party gave these payments to them, even though they never paid a dime into it!
Now, after violating the original contract (FICA), the Democrats have the audacity to turn around and tell you that the Republicans want to take your Social Security away!  And the worst part about it is uninformed citizens believe it!
And, to make matters worse, congress exempts itself from Social Security and grants themselves 100% retirement benefits after serving only one term.
To further add insult to injury, while congress has let Morgan Stanley, Lehman, and other companies go under, they poured billions of bailout dollars into AIG.  Why?  One guess - who administers that fantastic retirement program congress voted for themselves when they opted out of Social Security?  Could it be - AIG!
Freedom means self-direction, self-determination, and self-reliance without the control and interference of government.  It also means you might not get everything you think you want but if you love your freedom, you will vote for representatives who also love your freedom and want to protect it.

On the other hand, if you feel like you are entitled and need a nanny to give you everything you want, you will vote for liberals and socialists.
Hope that works out for ya!
Have a nice day!.

Posted by hymns that preach at 4:27 PM 2 comments:

My Letter To Congress About Eric Holder

US Attorney General Eric Holder has continuously stonewalled the Congressional investigation into the "Fast and Furious" scandal by withholding evidence and documents requested by Congressional committees. As your constituent, I demand that you hold the AG accountable and hold the AG in contempt of Congress. We as Americans and voters deserve the truth. 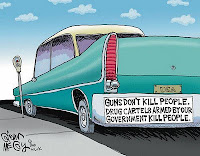 An  independent special prosecutor must be appointed to investigate and prosecute this crime.  As the nations top law-enforcement officer if he is convicted of perjury he should face the absolute maximum penalty.


Not only does ERIC HOLDER have contempt for congress - he has contempt for the United States (whose laws he is charged to enforce), the Constitution (which he swore to uphold and protect), the sovereignty of the several states, the Bill of Rights, our constitutional freedoms, our laws and the citizens of the United States of America.  He is a contemptible, in-your-face scumbag. He should be impeached along with his Marxist, America-hating boss whom he rode in with.

(I say that in love with respect.)

Ralph M. Petersen
Posted by hymns that preach at 1:37 PM No comments:

"Hate speech is any obvious truth spoken in the presence of an intellectually and emotionally inferior adversary."