No Editorial Comments, No Accusations, No Sarcasm. Just OBAMA In His Own Words.

7-22-12 Update Note:  I don't know how this got by me- I usually verify these kinds of posts on Snopes, Verifact, or some other fact check site before I post.  Thanks to Bob English for correcting me.  The photo is real although Obama has excused it on the technicality that it was during the playing of the National Anthem and NOT during the Pledge of Allegience to the flag.   Okay, I get it and He gets a bit of a pass although the U.S. flag code does call for civilians placing their right hands over their hearts during the playing of the National Anthem.  Furthermore, the photo is a still frame from a video in which ALL the others on stage, including Hillary Clinton, are standing at attention with their right hands over their hearts.  So I want to clarify the information in this post is FALSE and I am labeling it SARCASM and JUST FOR FUN.

Regardless of the accuracy of the content, it is my opinion, based on His policies, His actions, and His own words, that this president does not like the United States of America as it is but would rather substantively change it to a more socialistic and less free country.

No need for accusations here.  He told us in advance exactly who He was and what He planned to do.  But few of us were listening.


The following is a narrative taken from from Sunday's 07 Sept. 2008, 11:48:04 EST, televised "Meet the Press."  Then Senator Obama was asked about his stance on the American Flag.

General Bill Ginn, USAF (ret.), asked Obama to explain WHY he doesn't follow protocol when the National Anthem is played.  The General stated to Obama that according to the United States Code, Title 36, Chapter 10, Sec. 171... "During rendition of the national anthem, when the flag is displayed, all present (except those in uniform) are expected to stand at attention, facing the flag, with the right hand over the heart.  Or, at the very least, 'Stand and Face It'".


Senator' Obama replied, "As I've said about the flag pin, I don't want to be perceived as taking sides..."    "There are a lot of people in the world to whom the American flag is a symbol of oppression...."    "The anthem itself conveys a war-like message.  You know, the bombs bursting in air, and all that sort of thing." 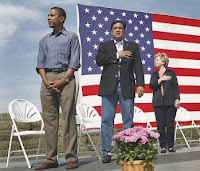 (ARE YOU READY FOR THIS?) Obama continued, "The National Anthem should be 'swapped' for something less parochial and less bellicose.  I like the song 'I'd Like To Teach the World To Sing.'   If that were our anthem, then I might salute it.   In my opinion, we should consider reinventing our National Anthem as well as 'redesign' our Flag to better offer our enemies hope and love.  It's my intention, if elected, to disarm America to the level of acceptance to our Middle East brethren.   If we, as a nation of warring people, conduct ourselves like the nations of Islam, where peace prevails -- perhaps a state or period of mutual accord could exist between our governments ..."


"When I become President, I will seek a pact of agreement to end hostilities between those who have been at war or in a state of enmity, and a freedom from disquieting oppressive thoughts . We as a nation, have placed upon the nations of Islam, an unfair injustice,which is why my wife disrespects the flag, and she and I have attended several flag burning ceremonies in the past."

"Of course now, I have found myself about to become the President of the United States and I have put my hatred aside.  I will use my power to bring CHANGE to this nation, and offer the people a new path.  My wife and I look forward to becoming our country's First BLACK Family.  Indeed, CHANGE is about to overwhelm the  United States of America."


So there you have it, folks.  The unpatriotic, America-hating Scumbag-in-Chief has spoken (Oops, sorry!  I couldn't help myself).
Posted by hymns that preach at 5:06 PM 2 comments:

There are some things that are just absolutely and fundamentally true. In fact, they are so universally evident and understood that they don’t even need to be argued or defended. One of those absolute truths is that we are all created by God. And because He is the creator and the giver of life, no one, and no government has the right to arbitrarily take the life of another. Nor does anyone have the right to own, control or hold another person hostage. And, no one has the right to deny any other person the opportunity to pursue his dreams or ambitions. The right to life, the right to be free and the right to pursue happiness are all rights that are granted to men by God-not by government.
In order to secure and protect their God-given rights, it is the responsibility of men to organize governments for themselves whose ONLY powers are those that are granted to them by the willing consent of the people. And, with those powers, they must act righteously for the good of those they govern.


Whenever any government becomes so destructive or oppressive that it threatens or diminishes these basic rights of its people, it is the responsibility of the people to change or abolish that government and create a new one that will most effectively secure their safety, freedom, well-being and happiness.


Governments that have been well-established and that have served well over long periods of time must be wise and very careful to remember their fundamental purpose and not substantively deviate from it for frivolous or fleeting causes. History has shown that most men will endure a lot of abuse and persecution and even evil at the hands of their governments as long as they think the abuses are tolerable because, over time, they become accustomed to it. Resistance is hard work and, frankly, it is much easier to just endure government encroachment as much as possible.


But when any government becomes so abusive and oppressive; when it systematically erodes the freedoms of the very people who established it and empowered it in the first place, to the point that it becomes tyrannical or dictatorial, it is the right, - no, it is the duty of men to overthrow that government and to organize a new system to guard their future security.

The preamble of the Declaration of Independence (paraphrased by me).
Posted by hymns that preach at 8:40 AM 1 comment: