I don't really care who comes from where to march in the Pasadena Tournament of Roses Parade but this is ridiculous.

The 180 members of the Akashikita High School Green Band received recognition and accolades, not for their performance but for their mission. They "earned" their "green" name by traveling all over the world playing concerts to promote efforts to fight global warming. Last week they were in Victorville and, oh yeah, they went to Disneyland.

So, lets see, 180 bandmembers with their entourage of chaperones and all that luggage (including their band instruments) flying around the world on jet airliners and using ground transportation, hmmm! I wonder how big their collective carbon footprint is. 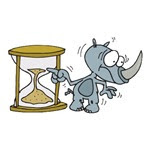 Oh, I'm sorry. I forgot to mention that they planted a ceremonial tree this week in Pasadena. That must count for some kind of offset; after all, I'm sure that act was useful in raising awareness about global warming.

I suppose I should do my part to raise awareness. I could put a green ribbon on my car and then drive around all day so that people can see my concern. Or better, I could purchase a fifteen foot antenna for my car so I could tie the ribbon to the top. That would "raise the level of awareness" to even greater heights.

I guess it doesn't matter that this is classical, liberal symbolism over substance; no matter that these kids' young, impressionable minds are filled with a bunch of happycrap; it's not important that they are arrogant enough to really believe that "man" can control the temperature of the planet; the important thing is that they all "feel good" about themselves because they really care.
Posted by hymns that preach at 9:19 AM

And just think about how much "self-esteem" they can gain by knowing they have control over the weather.

To the person who called me the dirty names:
First, I warned you about that kind of language. Your comment has been deleted.
Second, I only have this to say, "I know you are but what am I?"

So...someone called you dirty names over your article on the global warming hoax. It just demonstrates that there are gullible people who are quick to believe anything a "scientist" says, especially if the media picks up on it. It is amazing how the many scientists on the other side of this issue have been marginalized. If anyone can't see that this "global warming" nonsense is nothing but a political agenda...well...I have a nice bridge for sale.

Online Bible by Logos
Add this to your site!

Blessed are you
who are not easily offended
at what others post,
for you shall not be
continually irritated.