Big Tent Republican Revolution And The Compromise of Fundamental Beliefs

Just a few years ago during a time that many people referred to as the “Gingrich Revolution,” the Republican party gained popularity and, after many years of minority, took back both houses of congress, a majority of state governorships, and the executive branch of the federal government. It was seemingly, a great awakening and a victory for conservatism in America.

One of the descriptive phrases that characterized the party's desire to invite and unite people to the right side was that the Republican Party is a “Big Tent Party.” Under that Big Tent, the party bosses attempted to minimize differences and disagreements for the sake of winning back control.

Good intentions, I’m sure but as with all good intentions, there are often unintended consequences for our actions. I remember some of the well-intentioned mouthpieces in the media who encouraged us all to set our convictions and ideals and principles aside at the voting booth and use the power of the ballot to achieve incremental victories on the road to conservatism.
It didn’t work! Oh sure, the Republican Party won elections but was that really victory for conservatism? The Republican Party today is NOT a conservative party. By erecting the Big Tent, the party has become increasingly liberal and unprincipled to the point that, today, there is a dearth of true conservative defenders and statesmen. The Republican Party is only conservative in that, compared to the extreme liberalism, fascism and socialism of the political left, it is only slightly to the right. Both parties are traveling down the same road; one party just wants to go faster than the other. It was Huey Long who said, “The only difference I’ve found in Congress between the Republican and Democratic leadership is that one of them is skinning us from the toes up and the other from the ears down.” The partisan fighting that goes on today is not about ideological differences; it's about who gets to drive.
Ronald Reagan prophetically sounded the warning but no one was listening, “A political party cannot be all things to all people. It must represent certain fundamental beliefs which must not be compromised to political expediency or simply to swell its numbers.”
Ronald Reagan was very tactful; I am not. My paraphrase of his quote would go something like this; “When you live with pigs, you get dirty.” 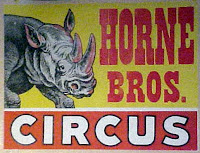 Those words are also particularly important and, as a matter of fact, biblically imperative for the Christian Church. The new methods employed to attract non-Christians and the unchurched masses into the Church requires the erection of a “Big Tent.”
And “Big Tent” is an appropriate description; in their attempts to swell their numbers, many churches today have abandoned or compromised fundamental beliefs and have developed programs that resemble three-ring circuses. The result is large groups of attendees who must be constantly entertained and amused. And just like the leftward slide of the Republican Party, the once-fundamental evangelical movement in Christianity has slipped left toward neo-evangelicalism and liberalism.

Posted by hymns that preach at 9:48 AM

Online Bible by Logos
Add this to your site!

Blessed are you
who are not easily offended
at what others post,
for you shall not be
continually irritated.